More about the film and it’s filmmaker here.

I can only dream of doing that kind of skiing, but I do dream.

>the call of the marathon

>Why do people run marathons? I don’t know. 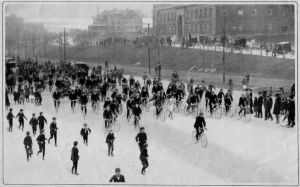 I’ve been thinking about running a marathon some day. I’m a long way from being ready or able to do so (a very long way), but it is a kind of dream of mine. I may never run one, we’ll see. But I’ve also been thinking about the early marathons, that is, those around 100ish years ago. When we think of running a marathon as a formal organized race, that idea has only been around about 120 years even though the inspiration goes back to ancient Greece. In the early days the typical distance was around 25 miles. The thing that has got me thinking is the fact that at a certain point marathons were something new – a novelty in fact. I am reminded of when triathlons were the new thing, especially the Ironman*, which seemed impossible in length yet many people got excited to try it – whether they were ready or not – even though it was like staring into the unknown. 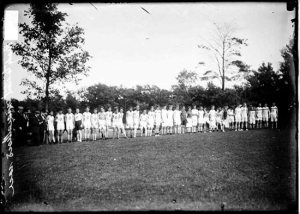 Runners line up before the 1907 Illinois Athletic Club Marathon.

Why do people get excited to run a marathon? I want to run one and even I can’t answer that except in vague terms of personal challenge. But I also have the advantage of knowing that many thousands of marathons have been run by millions of people. Still, for me, the idea of running a marathon is like staring into the unknown with a mixture of fascination, desire, fear, and wonder.

A hundred years ago marathons were still somewhat unknown. People did not know much about training for them or the physiology of endurance sports. The clothing they wore, especially the shoes, was not suited to running in the the way we expect today. And, I would assume, that the races themselves were not as well managed or supported as they are today. But still runners (only men for years) lined up at starting lines with high hopes and anticipation.

Runners line up before the 1909 Ramsey to Huntingdon marathon.

What I find curious is the ways people think about marathons. For many it is a kind of ultimate personal challenge that calls to them. To others they roll their eyes and say they can’t imagine why anyone would even try. I’m closer to the first group, though I have never run a marathon, and looking at me one might think I never will. For many the distance (26.2 miles today) is an kind of impossible distance. Yet I recently posted about a 135 mile ultramarathon race through Death Valley in the middle of July every year – and people show up, run it, and finish. So what is it that attracts people to do seemly crazy endurance events and enjoy them?

Those early marathoners were staring into the unknown to some degree. Running 25+ miles was thought to bring one closer to death, a test of one’s willingness to push oneself to the limit. Today we know more, and it’s amazing how many “non-runners” aim for completing one. Yet, even with the huge numbers of people running marathons, and the increase in marathon choices, it is still a mystery why many of us find ourselves desiring to join the fray – even if in the most humble way.

* First run in Hawaii in 1978, the Ironman Triathlon consists of swimming 2.4 miles in the ocean, followed by biking 112 miles, and then running a marathon, raced in that order and without a break.

This is a human powered vehicle – in other words one pedals to make it go. The chassis is aluminum. The first one was designed and handbuilt in the 1980s. Since then several models have been developed, including one with a carbon fiber chassis. They are built in Europe, but kits can be ordered to build one yourself. Unfortunately, they are far too expensive for my budget, but I can dream can’t I?

I would smile too if I had an Alleweder.

>The Flight of the Gossamer Condor

>I just wrote a post on bicycle speed records and the really cool human powered streamliners. That got me remembering to my childhood and one of the most amazing accomplishments that got my attention – human powered flight and specifically the Gossamer Condor. I want a plane like that.

That was in 1977. It’s amazing how far we’ve come in technology in general since those days, yet the Gossamer Condor still look state-of-the-art.

>How fast can a bicycle go?

>I remember when John Howard broke the land speed record for a bicycle in 1985. I thought that was the coolest thing ever at the time. He did it by having a modified car tow him up to a minimum speed so his high gearing could begin to work and having the car block the wind for him while he pedaled in the still air just behind the car. He reached an amazing 152.2 MPH. That record was broken later by another cyclist using the same basic technique.

But what if no fossil fuels were present? What if one had to start from zero without being pulled up to a ‘starting speed,’ and then continue pushing through the wind yourself? That is the real test for bicycle and human powered vehicle speed records.

Trying to break the record:

I have to say I would LOVE to ride in one of these bikes. Years ago I once rode a recumbent. It was a lot of fun, but a little strange too. Nowadays I see lots of recumbents and human powered vehicles. But it would be so cool to pedal a streamliner bicycle, even if there’s not much practical application beyond mere speed.

>We all have our fantasies. Mine include such things as climbing Everest, racing the Baja 1000, and going for a speed record at Bonneville Salt Flats. None of these things will I ever achieve, but I still love the dream.

In that light here are three clips of speed record attempts at Bonneville Salt Flats:

…and for all of you who ride around on those 50cc scooters that only have a top speed of maybe 30 MPH, how about taking that little engine up to 140+ MPH?

>I want to thank everyone who made this possible 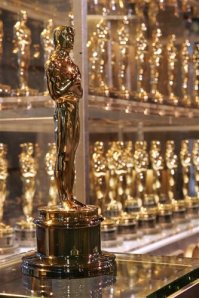 The Oscars are almost upon us and I am excited. Yeah!

[note: most of the text in this post I lifted from comments I made over at Jim Emerson’s Scanners blog.]

Okay, I do have to say that I love watching the Oscars. I know that it is essentially a gimmick (the industry awarding itself, the ceremony invented to promote film and increase sales, etc.) and I know that the best don’t always (usually?) win, nor are the right films always nominated. I know there are lots of issues and problems with the Oscars, and at one level I poo poo them. And yet, there I am, planted in front of the television from the first pre-Oscar broadcast to the final post-Oscar interviews, commenting and cringing, laughing and teary-eyed, annoyed and elated. And I have to confess that each year, from since I was a boy, I have imagined myself up there getting my award, etc. I certainly can’t stand shameless self-promotion, even at the Oscars, but I do love the whole spectacle. One reason is that it is amazing to see so many filmmakers in one place. I just want to say, “those are my peeps!” and give them hugs and handshakes, and have them acknowledge me, and be important enough to acknowledge them, etc. Of course, from the safe distance of the television broadcast and my comfy couch, though. Oh, and I have to admit that I really get into the whole “who’s wearing who” thing. I’m not a fashion/haute couture kinda guy, but it’s my one time each year to let myself go, so to speak. To put it in perspective for me: if I watch the Superbowl I feel as though I’ve wasted my whole day, however, when I watch the Oscars I actually feel like I’ve added something to my life, even if that something is a little too smug, a little too glitzy, and little too shallow at times. Maybe I’m just sappy. 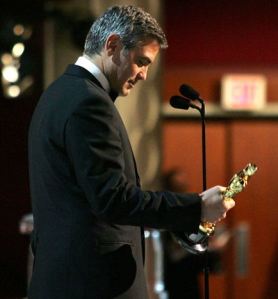 Of course, when I win my Oscar, and I’ve been planning to do so for a long time, I will try to keep my composure, be humble, and be honest. I have my speech all planned:

I want to thank you all for coming here tonight. Ever since my acting teacher, Ms. Johnson, said I didn’t have the talent to win an Oscar I set out to prove her wrong. And that’s why I became a director. So there is wonderfulness in this crazy old world. And this (I hold up my Oscar) proves that God does love those who sacrifice everything for the pursuit of their craft, and a few other things. I want to thank those who have been with me through thick and thin, like my dog and the Starbucks drivethrough. I also want to thank the following people… (I pull out a long, long list and then break down weeping hysterically. This list falls to the floor. I continue to cry. The exit music begins. Immediately I stop crying and regain my composure.) Filmmakers, all of us, have a duty (at this point I get louder to talk over the music) to bring some happiness into the little lives of humdrum people and maybe change the world just a little bit for the better. I know that didn’t come out right, but I know you’ll forgive me, and you’ll forgive me for saying (louder still) that I’m so glad to get something I truly deserve! Not just I, but also those who lost. Take that Ms. Johnson! Thank you all again. Directing is a humble profession! (I hold up the Oscar.) This is for all of you! I love you all, I truly do! Goodni…! (Cut to commercial).

Honestly, I can hardly wait for my Oscar. 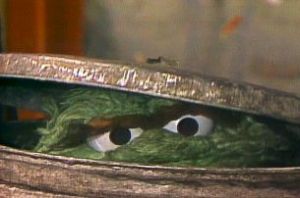